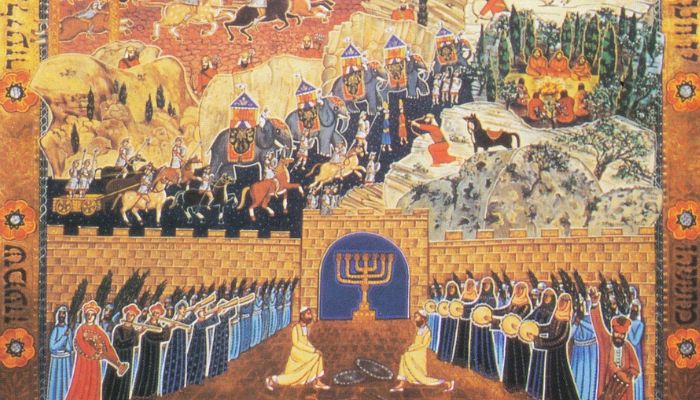 The Maccabean revolt was a response to the blasphemous and barbaric acts of Antiochus IV Epiphanes. He is described as a wicked root in 1 Maccabees 1:10. He “wrote to his whole kingdom, that all should be one people, and everyone should leave his laws. . . . Many also of the Israelites consented to his religion and sacrificed unto idols, and profaned the sabbath” (1 Macc. 1:41-43). If it were not for the Maccabean revolt, the Jews would have lost their identity markers. This is one reason why the Maccabean revolt was a positive thing for God’s people.

James VanderKam states that the writer of 1 Maccabees “tells the exciting story of how Judaism nearly perished, only to be saved through God’s raising up the family of Mattathias, who brought the Jewish people from near ruin to nationhood with the right to practice the traditional religion.”1 The freedom to practice their religion was important to every devout Jew. They were bound by the Torah and their worship of God was to be defined by it, not by some pagan overlord. Since Israel’s public worship was ordained by God, they were expected to follow God’s commands. By regaining their freedom, they were able to worship God and offer sacrifices. However, I could not endorse the means by which they acquired their freedom. The violence they showed toward their enemies and the way they assumed the priesthood are not commendable. Moreover, the compromises the Hasmonean dynasty made in these areas did not produce desirable results for the spiritual health of God’s people. Hence, the Maccabean revolt had positive and negative effects.

Concerning the battles they fought during the Maccabean revolt, the Jews were outnumbered in most of their battles. But even though the odds were against them, Judas Maccabeus encouraged them to fight for their freedom: “It is no hard matter for many to be shut up in the hands of a few; and with the God of heaven it is all one, to deliver with a great multitude, or a small company. For the victory of battle standeth not in the multitude of a host; but strength cometh from heaven” (1 Macc. 3:18-19 KJV). After their victories they expressed their gratitude by worshipping God with songs of thanksgiving: “After this they went home, and sung a song of thanksgiving, and praised the Lord in heaven. . . . (1 Macc. 4:24 KJV). Perhaps this is why Dr. Lamerson states that the Maccabean period is regarded as the greatest period in the history of Judaism since the time of David.2

It is interesting to note that the church also experienced comparable occurrences in its history. First, the martyrdom of Stephen (Acts 7:59-60) initially appeared negative, but ultimately served to advance God’s kingdom because it ignited a missionary movement. Luke notes, “Those who had been scattered preached the word wherever they went” (Acts 8:4 NIV).

Second, the medieval period appeared to be a dark time. However, the sparks that came from anti-clericalism, ecclesiastical controversies, political upheavals, and the persistent cry of the Renaissance: ad fontes, eventually ignited a flame—a Reformation that blazed through the world. As I look back at what God did before and during the Reformation, I am amazed at how He sovereignly orchestrated every event (good and bad) to bring the church back to a place of truth.