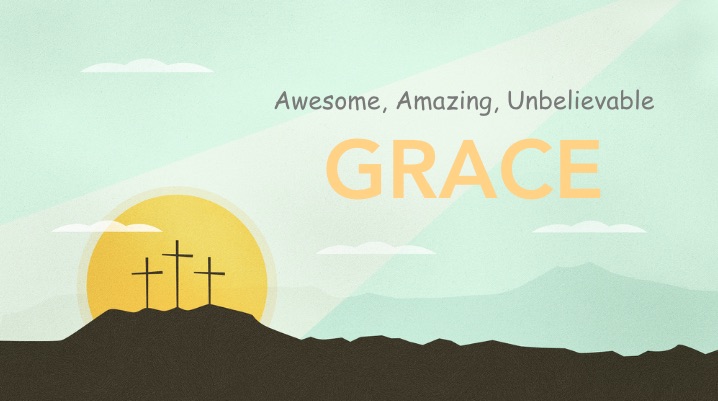 “6 For while we were still helpless, at the right time Christ died for the ungodly. 7 For one will hardly die for a righteous man; though perhaps for the good man someone would dare even to die. 8 But God demonstrates His own love toward us, in that while we were yet sinners, Christ died for us.” Romans 5:6-8

GRACE – As far as I am concerned, this has got to be the most amazing word in the English language, especially in the light of how the Bible uses it. To understand it correctly and grasp its implications is both mind-boggling and life-changing. And to the mind untouched by faith, its meaning and truth is truly unbelievable, really quite impossible. To think, as we are told in Scripture, that the salvation of sinful, rebellious men is free (Ephesians 2:8-9), having been paid on their behalf by One who was without sin and guilt (John 19:4, 6; 1 Peter 2:21-22), not only so that their sins against a most holy Creator may be forgiven (Colossians 1:13-14), but also so that these very same rebels may be adopted as this Creator’s own children (John 1:12; Romans 8:15; Ephesians 1:5), is quite simply mind-shattering and – apart from God-given faith – unbelievable!

Tragically, for most people, this truth is not only unbelievable but, really, unacceptable. For some reason, in our sinfulness we have always thought and believed that there is enough good in us to make ourselves worthy before God by our own efforts of righteousness. In truth, from Scripture we will see that this was the lie that was fed to us even from the very beginning when the serpent deceived our first parents, telling them, “… that in the day you eat from [the fruit] your eyes will be opened, and you will be like God, knowing good and evil” (Genesis 3:5). This very well could have been what made man think that, though he is not perfect (and he will never claim to be perfect, mind you), there is enough good in him to earn, if not the favor of God, then just heaven itself. It is this sense of self-worthiness that feeds on the works-mentality that has since dominated man since the Fall. He believes that, although he can fail because he is imperfect, because he is inherently good enough, he can pay and make up for his failures on his own. In this way, he won’t have to be indebted to anyone but himself. This is why most are averse to the message of the Gospel – not only because it teaches that there is nothing in man to merit God’s mercy, but also because to acknowledge that would put him in a position of utter dependence and indebtedness to God who alone can save him.

But for us who have been made to see that there is absolutely no hope in ourselves, the grace of God is the confidence upon which our souls rest. It is the bright light that guides us safely home in the midst of the tempest of our sinfulness. It is the anchor that holds us strong amidst the waves of condemnation that constantly threaten to dash us upon the rocks of despair. And if there is one passage in Scripture that starkly and beautifully paints for us the grace of God, it is Romans 5:6-8.

Think about this. Would you readily die, without any hint of hesitation, for someone good and righteous who did not know you – just someone who is a good person? And even if he did know you and might even be related to you, would you – without any second thoughts? Romans 5:7 seems to hint at this hesitation: “For one will hardly die for a righteous man; though perhaps for the good man someone would dare even to die.” Hardly? Perhaps? In other words, it’s… uh… possible… But there’s no certainty, is there? Maybe…

But the reality of our situation tells us a completely different – in fact, opposite – circumstance. According to Ephesians 2:1-3, “1… [we] were dead in your trespasses and sins, 2 in which [we] formerly walked according to the course of this world, according to the prince of the power of the air, of the spirit that is now working in the sons of disobedience. 3 Among them we too all formerly lived in the lusts of our flesh, indulging the desires of the flesh and of the mind, and were by nature children of wrath, even as the rest.” Colossians 1:21 tells us that, “… [we] were formerly alienated and hostile in mind, engaged in evil deeds” towards God. We are told in Romans 3:23 that we “… all have sinned and fall short of the glory of God.” (I invite you to take a moment and look at the charge leveled against us by God in Romans 3:9-18 to see the seriousness of our plight.)

And yet in the light of who we are and how God sees us, Romans 5:6 tells us, “… Christ died for the ungodly.” And as if to magnify and make crystal clear the greatness of God’s grace in loving us, Paul declares in v. 8, “But God demonstrates His own love toward us, in that while we were yet sinners, Christ died for us.”?span> In other words, God did not wait for us to make ourselves right in His eyes before He sent Christ to die in our stead!

Think of it again. If you would hesitate to die for one who is good and righteous, would you even entertain the thought of dying for someone who hated you, offended you, rebelled against you and treated you as an enemy – and killed your one and only child. How about adopting that murderer to become your own? (You must be joking, right, Pastor?)

But that is exactly what God did when He sent Jesus to die for sinners. He died for us even when we were yet ungodly and sinning against and unrepentant toward Him. Yes, of course, the efficacy of Christ’s payment on the cross for us waited for us to come to Him in faith and repentance, but Jesus already had died for us even way before we acknowledged our need for Him and His work on the cross.

That is why for me (and I trust for countless other believers), Romans 5:6-8 must be among the most amazing passages in the whole of Scripture. When I think of these verses, I cannot help but be both awed and humbled by the grace of God in Christ in loving me the way He does. But then, here’s the thing: if He loved me this much when I was yet ungodly and an unrepentant sinner, how much more now that I have been forgiven, having believed in Him, repented of my sins, and been indwelt by the Spirit of Christ! Romans 8:31-32 just comes to mind: “31 What then shall we say to these things? If God is for us, who can be against us? 32 He who did not spare His own Son, but delivered Him up for us all, how shall He not with Him also freely give us all things?” This is an argument from the greater to the lesser: if God gave us the best of the best – His only begotten Son, Jesus Christ – how can we ever think He would withhold from us the far lesser things we would need in this life? In fact if we continued to read from Romans 5:8, verses 9-11 tell us that if God could do what He did in v. 8, how much more now that we have been saved and made righteous in Christ? Feast your soul on these words: “9 Much more then, having now been justified by His blood, we shall be saved from wrath through Him. 10 For if when we were enemies we were reconciled to God through the death of His Son, much more, having been reconciled, we shall be saved by His life. 11 And not only that, but we also rejoice in God through our Lord Jesus Christ, through whom we have now received the reconciliation.” Take note of those phrases “much more” and “not only that” that point to the greater things that we now have in Christ.

The greatness of this awesome, amazing, unbelievable grace should have a profound impact everyday in our lives as believers. In the face of the daunting challenges and the almost relentless trials that many of us face, whether as individuals or as a church, how could we allow ourselves to think less of our God by doubting His love, goodness, mercy and patience, choosing to see Him more as a Father who is losing His patience toward us, looking upon us with stern eyes, ready to give us the spanking of our lives for all our failures and sins? Yes, it is true that because He is holy He will certainly deal with our sins and discipline us accordingly. But that discipline, though unpleasant (Hebrews 12:5-11), is always administered in a love so perfect that the Psalmist testified, “He has not dealt with us according to our sins, nor punished us according to our iniquities” (Psalm 103:10).

We must always seek to see this loving grace of God in all His dealings with us – in both the pleasant and the painful. He has never and will never change His mind about choosing to save us and making us His own. Being the God that He is, He already knew us perfectly and thoroughly even before He created us. He knew how many times we would fail Him and grieve His heart and yet – and yet – He chose us still, loved us still and saved us still! Think hard on this the next time you are tempted to think less of God and His grace.