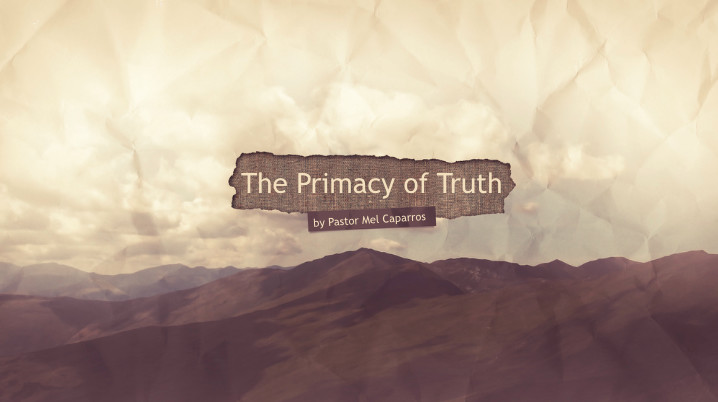 Hugh Grant, the famous British actor said one time: “I don’t believe in truth. I believe in style.” Such statement is downright foolish and extremely dangerous to one whose life hangs in the balance between heaven and hell. It seems that Hugh no longer knows how to separate fiction from reality, being in the film industry for so long a time.

Truth is what sets us FREE, more so Biblical truth about salvation. Every preacher of the gospel should never say “I believe in style” and downgrade truth to oblivion. One who does that may not be a real servant of God but a servant of himself or worse of the evil one.

Here are some points in the matter of presenting the gospel.

There must be a CLEAR PRESENTATION of the GOSPEL – We’re all aware of the parable of the wheat and tares. Tares appear similar to wheat until harvest time makes it apparent which is genuine and which is not. Sometimes the presence of professing, nominal Christians is the fault of a FAULTY, MUDDLED, UNSCRIPTURAL PRESENTATION of the gospel. Here are some NEGATIVES in contemporary presentation of the gospel.

Now, on a positive note, we should be able to hear in our messages the following LANGUAGES of the gospel as found in the Book of Romans, the Book of Ephesians and elsewhere in the Scriptures:

We need to note that for salvation to take place, the PATH of FAITH and REPENTANCE are ABSOLUTE NECESSITIES (Acts 20: 21).

Faith means FULLY RELYING on Jesus’ sacrifice as the means to salvation. It is not TRUSTING A LITTLE in OURSELVES and a LITTLE in God. It is trusting COMPLETELY on God and God alone.

EPH 2:8 For it is by grace you have been saved, through faith–and this not from yourselves, it is the gift of God– 9 not by works, so that no one can boast. 10 For we are God’s workmanship, created in Christ Jesus to do good works, which God prepared in advance for us to do.

Repentance means a CHANGE OF MIND; it doesn’t mean changing yourself because that would mean that salvation is by GOOD WORKS, which is false. It means changing your mind about sin, from something that you enjoy to something that you now HATE. You implore the HOLY SPIRIT to take full rein of your life, so that you are fully surrendered to God for Him to effect changes in your life.

Having said all of these, let us then be extra careful in the way we present the Gospel, because the lives of people hang in the balance and we do not want to be accountable in mishandling truth. Let us fight for the primacy of truth in our pulpits and in our personal witnessing that a genuine harvest of souls might take place.