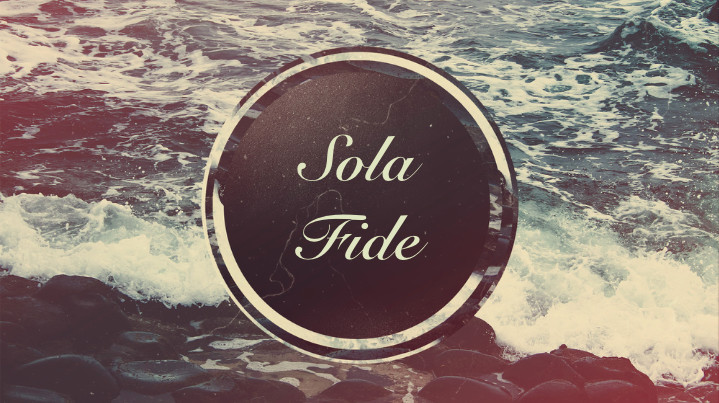 Why do we call ourselves protestants? What ‘protest’ are we a part of? What are we protesting against?

The doctrine of Justification by Faith Alone has been largely ignored in our day and age. As possibly the singular most important theological underpinning which birthed the Protestant Reformation, Sola Fide (which is Latin for Faith Alone) has been increasingly neglected.

Pragmatism has become the spirit of the age – more concerned about pop culture, entertainment, and pleasing people – which has caused many churches to lose sight of the gospel of peace which reconciles sinners to God and His righteous wrath.

Have we ‘dumbed’ Christianity down to nothing more than moral, therapeutic deism? Is being good, kind, law-abiding all that matters? Do we go to God just to feel good about ourselves? Did God leave the world alone after creating it and is no longer presently involved?

Ignorance has also been a prevalent stumbling block for many, me included. I never really understood what exactly it is that the Protestant tradition is (and was) protesting against.

Let us trace the foundational beliefs of evangelical orthodoxy.

Man is, first and foremost, radically corrupt. Sin entered the world after Adam and Eve chose to disobey God. Sin has been and continues to be the ultimate, universal problem of humanity. It is all-pervasive, irrational, deceitful, hardening, enslaving, debasing and defiling. Worse yet, we actually love this darkness.

Our sin problem has two distinct aspects: internal and external. Internally, we have a bad heart. We are by nature enslaved by wicked inclinations and desires: we are able to sin and unable not to sin.

Externally, we have a bad record. Each of us has objective guilt in the eyes of God’s law. We are responsible for our wrong doing and we deserve to be punished. Since the consequence of our sin is death, and we consider God as our enemy, God’s wrath deserves to be poured out upon us when the day of judgment comes. Surely, on his own, man cannot save himself.

What it means to be a Protestant is to reject any notion of salvation which is merited by any amount of human works, effort or desire. Good works, are instead, the fruit of genuine saving faith.

In the 1500s, Former Catholic monk Martin Luther, who ignited the Protestant Reformation, clearly saw the absolute significance of Sola Fide prior to his conversion who by his own testimony “hated God.” While studying Paul’s Epistle to the Romans, he ‘stumbled’ over Romans 1:17 which said: “[In the gospel] the righteousness of God is revealed from faith to faith” (KJV).

This simple biblical truth ushered in the realization that the righteousness of God could become the righteousness – perfect moral performance – of the sinner. This could only happen through the means of faith alone, continued in the same verse: “… as it is written, ‘the just shall live by faith.'”

This great truth provides the biblical assurance that Christians are justified by faith alone. In other words, faith also means by trusting in Jesus alone. Practical holiness and good works are not the basis of anyone’s acceptance before God. To those who believe, God credits (reckons or accounts) the righteousness of Jesus Christ to their account: “To the one who does not work, but believes in Him who justifies the ungodly, his faith is reckoned as righteousness” (Romans 4:5).

When thought over more deeply one would wonder: ‘How can an absolutely just and righteous Judge ever justify (declare righteous) an absolutely guilty and condemned criminal?’ If God we could simply ask forgive us, even if we have transgressed his laws, we are asking God to be a corrupt judge. Divine justice must to be satisfied.

By unmerited favor, by grace, God chose to show his mercy to those who believe. Jesus Christ “bore our sins in His body on the cross” (1 Peter 2:24). A judicial transaction had taken place that satisfied God’s justice and freed us from the power of sin. How did that transaction take place? Through imputation: in which our sins have been credited to Christ and were paid in full. At the same time, God imputes divine righteousness to the sinner through Christ. There is a double imputation that happens.

This is glaringly made clear in Ephesians 2:8-9: “For by grace you have been saved through faith. And this is not your own doing; it is the gift of God, not a result of works, so that no one may boast.“

Jesus Himself taught justification by faith alone. A classic example is the thief on the cross. In Luke 23:43, Jesus declared “Truly I say to you, today you shall be with Me in Paradise.” For the thief, no amount of work, sacrament or penance was necessary for him to secure his salvation.

Saving faith itself is not from us, it is a gift from God. Almost simultaneously, God’s saving singular work on the believer produces a regenerated heart, repentance and faith.

In practical Christian living, believers have no need to despair. We are to look to Christ and remember that not only are we justified through faith, but the works and merits and benefits of Christ are also credited to us along with being adopted into God’s family as first-class children (adopted persons during the time of Christ were not at all regarded as second-class). This is, indeed, good news for we would despair if our acceptance to God depended on our efforts to be ‘good enough’ to be accepted by God. In Christ, nothing can separate us from God’s love.