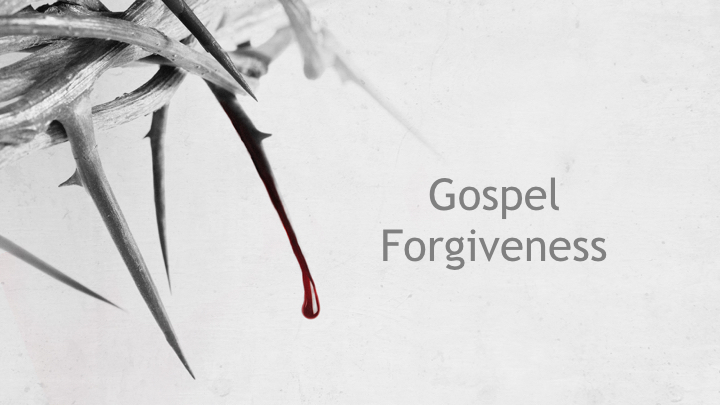 Forgiveness is at the heart of the Gospel message. In it, undeserved forgiveness is offered and the cost is paid in full. The Gospel is central in our daily Christian life. A life that lives the fully implications of it cannot help but naturally extend the same grace, forgiveness and forbearance to others.

The Gospel means good news. For it to be good news, we have to know what the ‘bad news’ is. That involves not just knowing what sin is but actually seeing its hideousness, admitting and owning up to our sin. At the core, we have rebelled wilfully against God, breaking his heart, though he created us and initially appointed us as co-regents of creation. God, being holy, demands perfect obedience. In his holiness, perfect justice is necessarily expected of him when all of us will give an account not just for our actions, but even our thoughts and motives.

Thinking is foundational to faith. And we should think and reflect on the content of our faith because it isn’t faith in itself that saves, but it is Jesus – in whom we trust – who saves.

This is just a broad brush stroke of what is personally the fuel that keeps me going each day. Yet, the Gospel really isn’t about us. It is about a person: about Jesus, who He is, who he claimed to be, and what he offers. It proclaims how his penal, substitutionary death for our sin in our place on the cross and perfect life of obedience to God’s righteous holy standards credited undeservedly to those who trust in Jesus can be so liberating, life-transforming, heart-changing and more. All of this has been foretold by the prophets since the time of the Old Testament where we see the grand themes of the coming of the greater and better prophet, priest and king who embodies the qualities of the Son of Man of divine origins (the one foretold in Daniel 7) and the Suffering Servant (in Isaiah 53).

The Gospel goes against the grain of how religion is typically defined in the mainstream. Religion is generally perceived to be a sort of self-salvation project based on our performance and a list of do’s and don’ts so that we could gain leverage over God. Let us be wary, that even when we do things in the name of God, we may actually just be in it not because we Love the Lord but only because ‘we want him for his money’ or we simply want to be ‘safe’. The Gospel is a message not only to the quintessential law breakers, but also to those of us who resemble the self-righteous pharisees, who trust in their own righteousness and not in the righteousness of Christ. We can think of ourselves as privileged because of our performance or theological head-knowledge, and so fall into the very sort of religion that the bible condemns. We can be as the ‘older brother’ in the renowned parable of the Prodigal son who demands that our father would bless us because of our obedience: as if we stand because of our ‘self-salvation’ project. For this, we have to repent of our ‘good-works’, especially when they are done for the wrong reasons. After all, Isaiah 64:6 reminds us that ‘all our righteous acts are like filthy rags’! Do we do what we do for our sake? Or for the love of the Lord? The Gospel is for us in the church as well. We can be forgiven. Forgiveness is offered.

In ‘religion’ (or ‘false religion’), we have to do certain things to get a reward. In fact, because we do those things we ‘feel’ a sense of entitlement and we get bitter and self-absorbed when things don’t go our way. ‘Religion’ says “I obey, therefore I am accepted.” In irreligion, we break the rules but we live up to our own self-made expectations that we still end up living as if we would be justified by the works of our hands and our will-power. In essence, we are setting ourselves up for a self-salvation project too. The Gospel (which is ‘true religion’) says “I am accepted because of and through Jesus, therefore I obey.”

I have not been perfect in dispensing forgiveness in my life. But I have experienced a miraculous change in heart to extend forgiveness to my mother and father who have both indirectly hurt me profoundly in the past. I am thankful that God himself took the punishment that I deserve as a rebel in cosmic treason on the cross. And that even when I am wronged, I don’t have to bear it all upon myself, I can trust that God will avenge and be just in dispensing perfect justice for wrongdoing. On one level, there is the sin that Jesus bore on the cross and paid the full penalty for. And on the second level, I trust that the promised judgment day that is to come is when all things will be made right.

Tim Keller, author of the 2008 New York Times Bestseller ‘The Reason for God’ wrote on forgiveness:

”   …Forgiveness means refusing to make them pay for what they did. However to refrain from lashing out at someone when you want to do so will all your being is agony. It is a form of suffering. You not only suffer the original loss of happiness, reputation, and opportunity, but now forgo the consolation of inflicting the same on them. You are absorbing the debt, taking the cost of it completely on yourself instead of taking it out of the other person. It hurts terribly. Many people would say it feels like a kind of death. Yes, but it is a death that leads to resurrection instead of the lifelong living death of bitterness and cynicism.

Forgiveness means bearing the cost instead of making the wrongdoer do it, so you can reach out in love to seek your enemy’s renewal and change. Forgiveness means absorbing the debt of the sin yourself. Everyone who forgives great evil goes through a death into resurrection and experiences nails, blood, sweat and tears.

Should it surprise us, then, that when God determined to forgive us rather than punish us for all the ways we have wronged him and one another, that he went to the Cross in the person of Jesus Christ and died there?…On the Cross we see God doing visibly and cosmically what every human being must do to forgive someone, though on an infinitely greater scale…There was a debt to be paid—God himself paid it. There was a penalty to be born–God himself bore it. Forgiveness is always a form of costly suffering.” (‘The Reason For God’ p.188-189, 192-193)